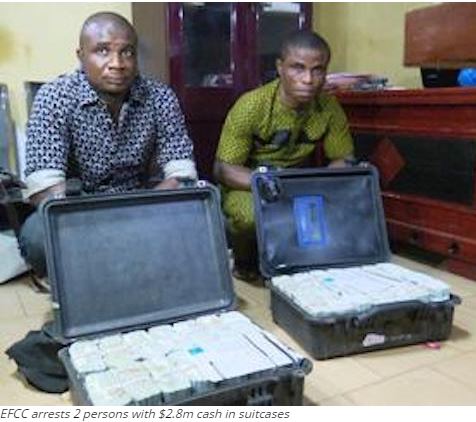 The management of Bankers Warehouse has called on the Financial and Economic Crimes Commission (EFCC) to release cash and its employees arrested at Enugu Airport on Thursday, Dec. 20

Bankers Warehouse is a company registered by the Central Bank of Nigeria (CBN) to carry out cash movement as well as currency processing. The company said in Lagos on Sunday that cash were seized while its employees were arrested while carrying out legitimate business of cash movement for one of its banker clients.

It said the employees were arrested, interrogated and detained at Enugu Airport by the EFCC while carying out cash movement of its clients from its Onitsha branch to Lagos in spite of providing identification details.

“The document provided also included a covering note from the bank authorising the team to move the consignment which is the standard practice.

“We hereby state categorically that the movement of this currency was a legitimate business carried out on behalf of a legitimate financial institution. “We emphasise that our employees are in no way criminals carrying out any act of illegality as the EFCC has tried to portray. “These young men whose character and reputation have been deliberately soiled by the EFCC operatives were conducting their legitimate duties as requested  bank customer of our company.

The company said that its client who had been unfairly exposed and accused of implied illegality and whose money was still improperly held by the EFCC operatives also deserved a special apology for the disclosure and damage to their image.

Style Inspiration: Actress Sharon Ooja Shows Us How to Dress for A Weekend Date