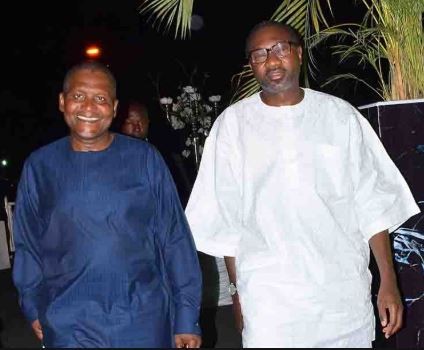 Africa’s richest man, Aliko Dangote, businessman, Femi Otedola, and the National Leader of the All Progressives Congress, Bola Tinubu have been named members of the APC’s presidential campaign council for the 2019 elections.

President Muhammadu Buhari’s Special Adviser on Media and Publicity, Femi Adesina, revealed the list in a statement issued on Friday via his Facebook page.

It is co-chaired by Buhari and Tinubu, with Vice-President Yemi Osinbajo and Adams Oshiomhole, APC national chairman serving as deputy chairmen.

Also on the council are all serving and former governors and members of the national assembly in the party.

The ruling party will kick off its reelection campaign in Uyo, capital of Akwa Ibom state, on Friday.

a. Deputy Director I- Chris Hassan

a. Deputy Directors – Brigadier General Gambo and Mr. U. Ukoma

5. All APC serving and former Governors

6. All APC Members of the House of Representatives

7. All members of the National Working Committee of the APC

STATE COORDINATORS
1. Governors are to serve as State Coordinators in their respective states

2. Governorship Candidates in non-APC States will serve as State Coordinators in their respective states.